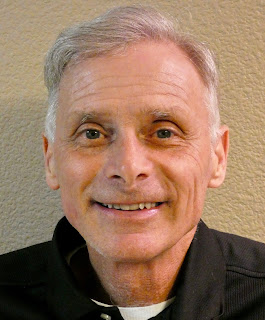 MAJOR CONTRIBUTIONS:
Steve was one of the driving forces behind the development of the first light weight composite paddle.  As one of the very early top competitive pickleball players, Steve and his father Arlen Paranto worked together to create a better, more balanced lightweight paddle.

At the time, Arlen worked for Boeing and was familiar with the lightweight panels used throughout Boeing aircrafts.  In 1984, he purchased some of this material from Boeing’s surplus store and fashioned the first light weight paddle.  Soon after, Arlen formed the Ultra-Lite Paddle Company and began making the Pro-Lite line of paddles to fill growing demands for this new product.  Ultra-Lite was the second company to make and sell pickleball paddles, but it was the only one with composite paddles for the next 14 years.  Within a few short years after the introduction of Pro-Lite paddles, almost all pickleball players in the Pacific Northwest were using them in competition.  By 2018, there were over 100 companies making composite paddles. Almost all mirrored the construction model of the original Pro-Lite paddles.  Steve also designed the first oversize “Magnum” paddle. 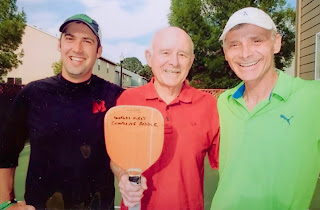 Steve promoted pickleball by teaching it as part of the curriculum during 30 years as an elementary school Physical Education teacher.  He also taught pickleball at Green River Community College and as a Certified Instructor for the International Pickleball Teaching Professional Association (IPTPA.)   He was heavily involved in running the annual State Games of Oregon in the 1990s into the early 2000s.  In those days, it was the only pickleball tournament in the entire state of Oregon. 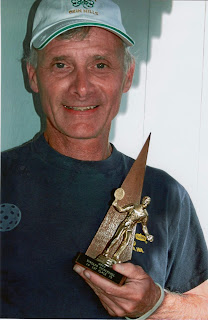 BACKGROUND:
Steve grew up doing many sports and activities with his dad.  Fishing, baseball, basketball, table tennis, tennis and bowling were favorite activities he enjoyed with both parents.  Steve was also an entertainer from a very young age.  His dad made him a ventriloquist figure when he was ten years old.  Steve started entertaining friends and classmates at school assemblies.  That turned into entertaining troops at Fort Lewis before the soldiers were deployed to fight in the Vietnam War.  He was the youngest entertainer, performing once a month for the Fort Lewis troops.  Steve enjoyed entertaining at home gatherings and public events throughout his adult life.

Steve taught elementary school physical education for 30 years and loved it.  He felt it was very important to get kids involved in many physical activities so that those kids could turn into healthy, active adults.  Today, he still plays pickleball with one of his early elementary school students.  His name is Marty Butler, now age 50, and he teaches at a school near where Steve had him as a student.

Steve credits his love of sports and creativity to his dad, but his competitive nature comes from his mom.  She also loved pickleball but hated losing more than anyone.  She was known to let a few bad words pop out of her mouth even during recreational play.

Steve was first introduced to pickleball during his freshman year at Green River Community College in the fall of 1974.  He started competing in tournaments that same year.  He has been involved in many areas of the pickleball world.  Besides his contributions to the development of the first composite paddle, in 2014 he also invented “The Quiet Pickleball Pad” that made the game a lot quieter.  He was also one of the first certified pickleball instructors under IPTPA (International Pickleball Teaching Professional Association.)  He is a contributing writer for Pickleball Magazine and has quite a few instructional videos available on the internet.  He has produced 23 Pickleball Podcasts (Pickleball Talks with Steve Paranto.)  In addition, he helped Onix design two of their top performing paddles. 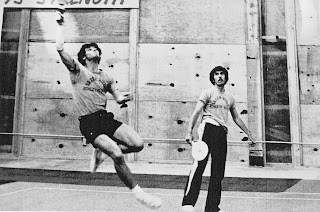 Final Doubles match of the World's First Pickleball Championships in 1976 with
Steve on the left and his partner Dave Lester on the right.  Dave won the singles in this event.

Posted by Pickleball Hall of Fame at 2:44 PM