CONTRIBUTOR AND PLAYER
INDUCTED IN 2017 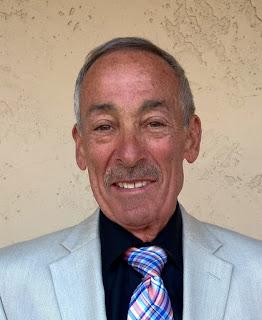 MILITARY:
Mark served in the U.S. Navy Reserves for 20 years and retired with the rank of Lieutenant Commander

MAJOR CONTRIBUTIONS:
As the owner of Pro-Lite Sports from 2004-2010, Mark developed some of the earliest lightweight, composite and graphite paddles.  In 2011, he passed Pro-Lite Sports on to his son, Neil Friedenberg.

In 2005, Mark organized the USA Pickleball Association (USAPA) and served as its first president.  He served as Past President from mid 2008 – 2010 and later served in a consulting capacity on the Board through 2017. The huge growth and expansion of pickleball was the result of the USAPA and its stated mission “to promote the growth and development of pickleball, not only on a national but an international level.”  This organization also provides players with official rules, tournaments, rankings, and promotional materials.  Four years after its formation, the USAPA hosted its first National Tournament, drawing almost 400 players from around North America.

He is the author “The Official  Pickleball Handbook” and  “Winning Pickleball.” 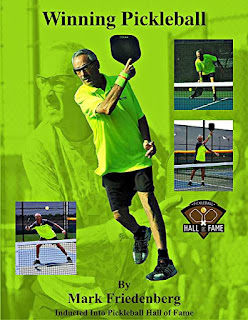 Mark started playing pickleball in 1989.  He is a National Champion multiple times over and has won more awards and medals than most players in the history of pickleball.

In addition to the gold medals he received many silver and bronze medals in the 2009-2018 National tournaments. 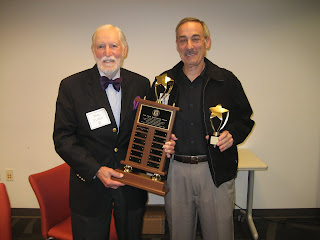 Phil Flash presenting his Inspirational Award to Mark in 2007

BACKGROUND:
From the time he was young, Mark’s life constantly revolved around sports. Besides pickleball, Mark played baseball, basketball, football, racquetball, softball, tennis and table tennis.  He coached Little League and Boys and Girls Club chapters for several years when his children were young.